Throughout the history, Myanmar (Burma) has experienced waves of immigration that have come southwards along the rivers Ayeyarwady (Irrawaddy), Chindwin, Salween (Thanlwin) and Mekong. These movements have brought in many different ethnic peoples, mainly from the Central Asian plateau (modern Tibet and China), and this is reflected in wide ethnic variety to be found in the country today.

Recent excavations in Pondaung area suggests Myanmar history has evolved through stone age. Primate fossils found in Pondaung are the evidence of the existence of man-like creatures 40 million years ago, which has been approved by some internationally renowned archaeologists. 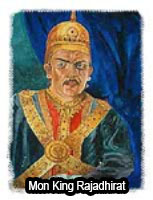 The first historically recorded inhabitants were the Mon, who from the 6th century BC settled all over the south, in the Ayeyarwady Delta and along the Gulf of Mottama (Martaban), as well as along the Chao Phraya river in modern-day Thailand. The Mon had flourishing cultural and economic links with India, and it was through these that Buddhism made its way into Burma, Myanmar.

Legend has it that the mysterious land of Suvarnabhumi (or "Golden Land"), mentioned in numerous ancient sources and the subject of much debate, was in fact the homeland of the Mon, who established their first kingdom in Myanmar in 300 BC around the port of Thaton, which developed into an important trading center. 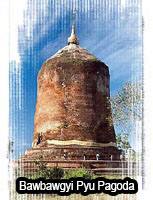 From the 1st century AD, the Pyus settled in central Myanmar. They were also quick to espouse Buddhism, and they founded highly civilized city-kingdoms which, at their peak, during the 7th and 8th centuries, also became prosperous trading centers. The largest city was Sri Ksetra, close to present-day Pyay (Prome).

Nanzhao, meaning in Chinese "The Lord of The South" was a powerful kingdom in present-day Yunnan state, China. It was from start to finish a multi-ethnic domain. But many of its people, particularly in western Yunnan, as well as the ruling class itself, spoke a language similar or ancestral to modern Myanmar. In the 9th century a gifted Chinese scholar-bureaucrat named Fan Chuo compiled a book (Manshu: Book of the Southern Barbarians) about Nanzhao, including a colorful ethnography of its component tribes. Many were simple folk, goat herds and shepherds, in the process of drifting southward, over the rugged mountains and into the blistering plains of central Myanmar.

This learned study mentioned these tribes as the Wu Man, the Loxing Man, the Bu Man, the Wangzhu Man and the Mo Man ("Man" meaning a type of barbarian). It was these people who were marshaled into the Nanzhao war machine, trained to be fighters, and died in not inconsiderable numbers or far-flung battle fields, against Tibet and China and even farther afield. By this time much of the Ayeyarwady Valley was also under Nanzhao authority as the warlike peoples of the north pressed down. In 832, Nanzhao destroyed the city of Hanlin, a Pyu city-state, close to old Tagaung, returning again in 835 to carry off many captives.

By the tenth century the Nanzhao empire had slowly faded from history. Some time around, the tribes in the west under their mang (chiefs) began filtering south, and finally occupying the fertile rice lands in Kyauk-Se region, near present-day Mandalay. They called themselves the Mranma or the horsemen. In 849, seventeen years after the Nanzhao's cavalry had last swept the towns of the Ayeyarwady Valley, Bagan was founded as a fortified settlement along a bend in the Ayeyarwady river. Within two hundred years Bagan had become the center of a great Buddhist kingdom, and its ruins today are one of the most magnificent sites in all Southeast Asia. 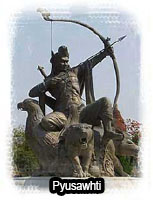 The Myanmar chronicles say that after the Nanzhao invasions a new dynasty arose, founded by a semi-mythical warrior king named Pyusawhti. It seems very likely that he was connected in some still slightly mysterious way with the old and fallen house of Nanzhao. The ruling class of Nanzhao had a peculiar naming system, in which the last name of the father became the first name of the son. This was the naming system of Pyusawhti and his descendants for seven generations. Somehow, two hundred years of Nanzhao Empire had washed up on the banks of Ayeyarwady and would find a new life, fused with an existing and ancient culture, to produce one of the most impressive kingdoms of the medieval world. From this fusion would result the Myanmar people and the foundations of modern Myanmar culture. 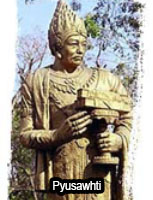 For two hundred years or so this new kingdom at Bagan slowly gained ground. Then in the eleventh century came a great burst of human energy in the form of Anawrahta (Aniruddha), who seized the throne as a teenager in 1044 after killing his cousin in single combat. The chronicles remember him campaigning in every directions, aided by his four captains. He also led his men to the old Nanzhao heartland and then built a line of fortified towns at the foothills of the Shan plateau to guard against any fresh incursions. He unified the Ayeyarwady Valley under a single sovereign and created a kingdom that matched fairly closely the borders of today's Myanmar.

Anawrahta was followed by a line of able kings. Together they erected thousands of temples and hundreds of monasteries, libraries, and colleges and repaired and constructed the dams and weirs that made middle Myanmar a great producers of rice.

Myanmar travel visitors to Bagan today will have a good intimation of the onetime prosperity and splendor of this medieval Buddhist kingdom. There remain a multitude of temples and pagodas, thousands by some accounts, some in ruins but many in good repair.

Mongol hordes in the thirteenth century brought terror and destruction to enormous swaths in Europe and Asia, and Myanmar was no exception. Baganwas already by then in decline, but the Mongol invasions hastened the demise of the kingdom. Myanmar was never integrated into the Mongol imperial adminstration but was nevertheless, for a few years, under the distant authority of Peking and Xanadu.

Taking advantage of the ensuing turmoil after the fall of Bagan, the Mons moved south and founded a new kingdom in Bago in lower Myanmar. The Shan also broke away and extended their territory westward, establishing a capital in Innwa on the banks of the Ayeyarwady. Some Myanmar families of court officials withdrew to Toungoo on the Sittaung River to await an opportunity to initiate the reunification of Myanmar, which did not happen for another 260 years. 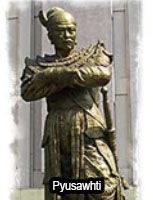 In 1541 the Myanmars under Tabinshwehti took advantage of the frequent wars between the Shans and Mons and captured Innwa and Bago. After his death, however, the kingdom again fell apart.

King Tabinshwehti's brother-in-law and successor, King Bayinnaung later re-conquered all the lost territory, won Chiang Mai and Ayuthia from the Siamese, and took back Tanintharyi, thus founding the Second Myanmar Empire. Other states on the Myanmar-Chinese border and Manipur, now part of India, paid tribute to Bayinnnaung.

During this period, trade with neighboring countries developed; Bago became an important port for traders traveling to China via the Ayeryarwady and northern Myanmar. It was also a convenient stop for traders going to other parts of Southeast Asia by way of Thanlyin, Mottama, and Pathein, which were important ports in Lower Myanmar.

Foreigners, especially Arabs and Portuguese, were very active in east west trade. The British, French, and Dutch trading companies were established in Myanmar in the 17th century when the capital was moved from Bago to Innwa. During the 18th century, the Shans became weaker, and the Mons, with help from the French, captured Innwa in 1752. 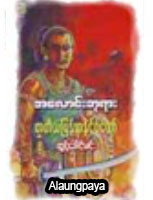 After conquering Innwa, the Mons tried to control all Myanmar until the Myanmar headman of a tiny village tract, Alaungpaya (Alompra), defeated them. After eight years of war, King Alaungpaya was able to unite the country again and founded the Konbaung dynasty, the third and last Myanmar dynasty. He also moved the capital to Innwa.

Another development during this time was the conquest of Rakhine by Hsinbyushin's brother, Bodawpaya. During his reign, Bodawpaya improved the tax collection, communications, legal, and educational systems.

In 1886, after three wars with the British, Myanmar became a British colony. The three Anglo-Myanmar wars in 1824, 1852 and 1885 had their origin in British economic and political interests in Myanmar. 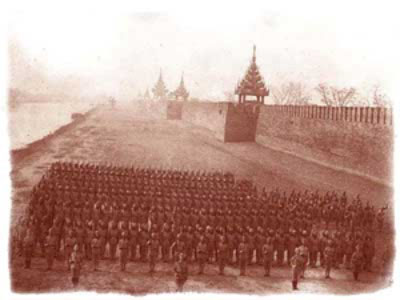 After the first war, Myanmar lost Rakhine and Tannintharyi. In 1852, the British annexed Lower Myanmar in order to close the gap between Calcutta and Singapore, and they made it a province of British India. In 1885 Myanmar tried to make contact with the outside world, especially France, during the reign of the last king, Thibaw. The British, fearing French interference and wanting a monopoly in teak, used a dispute between Myanmar and a British timber firm, accused of illegal logging, as an excuse to march to Mandalay, the capital at that time. In 1886 all of Myanmar became a province of British India, and the royal family was exiled to India.

The British introduced the classic divide-and-rule principle, giving the minority states permission to be ruled by their own leaders. They did not recruit ethnic Myanmar for their army. All important posts in the civil service were filled by Indians or other foreigners. Myanmar's natural resources were exploited by foreigners and profits channeled out of the country. The British allowed Indians to migrate to Myanmar to alleviate labor shortages in the rice fields. All these factors inspired the Myanmar nationalists to rebel against the British.

In the early 20th century, the nationalist movement, under the leadership of the Young Men's Buddhist Association (YMBA) and Rangoon University student leaders, grew in strength. During World War 2, General Aung San led the struggle against the British and the Japanese who occupied the country during the war. After the war the British finally gave Myanmar its independence. 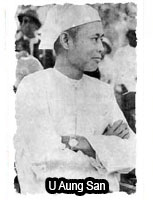 General Aung San is Myanmar's national hero and the father of Myanmar's independence. He started his political career as a young student leader at Yangon University, founding the Thakin movement together with other students. The members of this movement, dissatisfied with having to address the British as thakin (master) - feeling that this demeaned the Myanmar people - termed themselves thakin and wore traditional Myanmar clothes.

During World War 2, Thakin Aung San formed the Thirty Comrade, a group of 30 young men who swore a blood oath. They secretly went to Japan to ask for help and training to remove the British from Myanmar. The Japanese, however, proved to be ruthless when they came to Myanmar. Towards the end of World War 2, Aung San and his Burma Independence Army (BIA) sought the help of the British to drive out the Japanese.

After the war, General Aung San continued to negotiate for independence, which was won on January 4, 1948. Sadly, he did not live to see the day. On July 19, 1947, General Aung San was assassinated, together with six cabinet ministers, at the age of 32.

Ref: The Rivers of Lost Footsteps: History of Burma by Thant Myint U