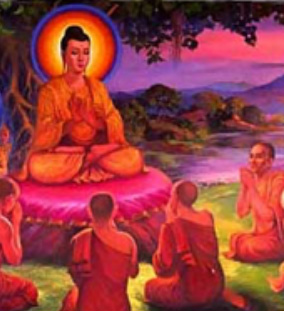 Almost 90 percent of Myanmar's population practices Buddhism, a major religion with some 300 million followers worldwide. Its two main branches are the Theravada and Mahayana doctrines. While Theravada Buddhism focuses on individual enlightenment, the Mahayana tradition seeks to bring salvation to all humans. One main difference between Mahayana and Theravada is that in the former, the Buddha of the future Meitrya plays a significant role and not in the latter, which focuses on the teachings of Gautama Buddha. A Buddhist monk, the Agga Mha Panditta Ashin Thittila put it this way;

Theravada Buddhism is not a religion in a sense in which that word is commonly understood, it is not a system of faith or worship. It is a path to follow for harmonious living and its essence is Metta, loving kindness to all creature and self.

Buddhism began about 2,5oo years ago. Buddha means "Enlightened One" and refers to northern Indian prince Siddharta Gautama (c. 563-483 B.C.). Prince Siddharta left a life of privilege to wander the world as a poor, religious man in search of the meaning of life. After many years of seeking and a period of intense meditation, he finally reached a peaceful state of mind that was free from all worldly desires. Buddhists call this plane of existence nirvana, or the state of Enlightenment.

The essence of Buddhism is contained in the Four Noble Truths - that all life involves suffering; that such suffering comes from desire or greed for things or people; that this suffering can stop if people learn to live without desire; and that this enlightenment, or detachment from worldly things, can be achieved only by following the Eight-Fold Path, or Middle Way, a philosophy that avoids extremes and emphasizes good deeds.

Because doing good is thought to bring the believer closer, stage by stage, to nirvana, all Buddhists try to keep the Five Precepts, or rules of conduct - not to lie, steal, kill (even insects), take intoxicants (such as alchohol or drugs), or commit sexual misconduct.

Myanmar's muslim population is concentrated in Rakhine state. The hill minorities worship various kinds of spirits, such as forest spirits, and their beliefs vary from group to group. These spirits differ from the nat spirits, or wandering souls, worshiped by some Burmese. 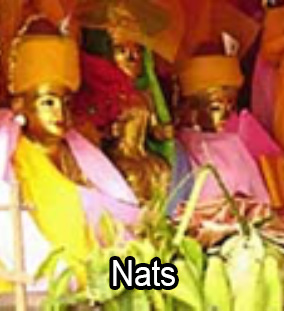 Many Burmese believe that the souls of people who have died violently continue to wander on Earth. The Myanmar spirit world has 37 nats, or spirits. Most of these are spirits of those who have died a violent death. These spirits are called nat. Mahagiri, one of the thirty-seven "official" nats, is regarded as the most powerful of the spirits. He is worshipped at Mahagiri shrine on Mt Popa, an extinct volcano near Bagan. Hundreds of regional nat are also worshiped in different areas - nat of trees, rivers, and mountains, and guardian nat of homes and villages. Not all Myanmar, however, worship nat. Some consider it superstitious and contrary to Buddhism. In the past, a few Myanmar kings tried, unsuccessfully, to ban nat worship in the country. 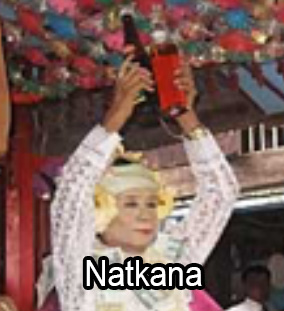 Regional ceremonies in honor of the nat typically last several days and take place at temples, in homes, or on the streets. Bamboo shelters are put up for public show known as nat pwe. A nat singer and an orchestra entertain the worshipers, who come to offer green coconuts and huge bunches of bananas to the nat. Other gifts to the spirits include cigarettes, alcohol, and perfumes. The central figure of the festivities is the nat kadaw, or nat-wife, a medium who enters a trance during the ceremony. Nat kadaw are usually women or transvestites (men who dress as women). The Taungbyon Festival is the most famous nat festival in Myanmar. 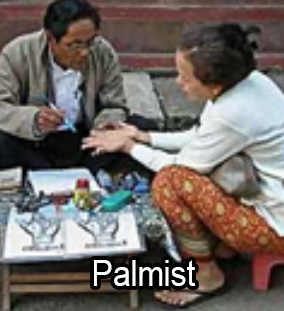 Astrologers are consulted by those who wish for certainty at some point in their lives, such as to pick auspicious days for weddings or ground-breaking ceremonies or to identify days on which to be cautious. To change the luck of a person, an astrologer may offer a change of name or advise offering certain flowers and leaves to the Buddha. He may advise on the kind of merit one should make; for example, the number of birds and fishes to set free, the numbers of rounds of rosary to say, or the kinds of food to avoid.

Astrologers and palmists may be found on the streets and on pagoda grounds. Large posters and big banners announce their names and advertise their claims of being able to predict winning numbers in the state lottery, a marriage partner, and even future existences.

Buddhists believe that to reach the plane of spiritual existence called nirvanna, a person must be reborn and live many lives, each a little better, hopefully, than the one before. Meditation and prayer count as good deeds. Other commendable works include alms-giving, worshipping in pagodas, shrines, or at altars, and acting generously without expecting any return in this life. Because earning merit is so important, many Buddhists give food to monks and nuns, hold feasts to feed lots of guests, and donate money to repair or build pagodas or resthouses.

BRINGING HONOUR TO OTHERS

One person's kind or noble act can also earn merit for someone else. In the past, wealthy people gave land, money, and even servants to monasteries. These temple servants earned merit for their former owners as well as for themselves. Similarly, when a boy or young man joins a monastery, that act brings honor to his whole family. For this reason, the shin-byu ceremony, or initiation into temporary monkhood, is a significant rite in Myanmar culture.

SHIBYU: THE MAKING OF A MONK 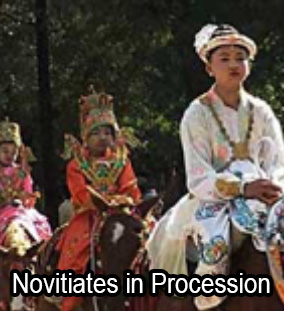 Shin-byu is a religious ceremony that all Buddhist boys are expected to undergo. It is considered the highest merit-earning act for the family. During the ceremony, would-be monks, or novices, are dressed in fine clothes to imitate the Buddha's early life as a prince. The boys are then carried, paraded on a horse, or taken in a car around the neighborhood. Their families hold elaborate feasts. Then comes the head shaving rite, which symbolizes giving up a life of luxury. A boy's parents usually hold out a white towel to collect his hair as his head is shaved. Newly shorn novices say prayers in Pali with monks, then enter a monastery, usually only for a few days or a week - shin-byu monkhood is temporary. At the monasteries, the novices learn to meditate, read the Buddhist Scriptures, and do humble tasks, such as sweeping the premises and running errands for the monks. Shin-byu is so important in Myanmar cultural life that families without sons occasionally "adopt" nephews, male cousins, or other boys to hold the ceremony. Towns and villages sometimes hold mass ceremonies, during which up to one hundred boys are initiated.