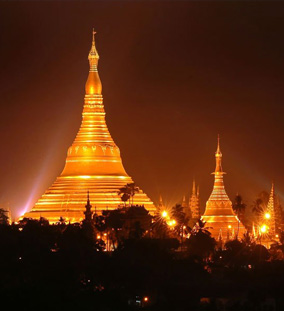 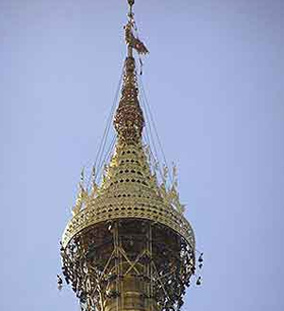 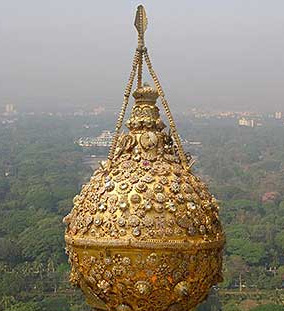 Although the precise origins of the pagoda are unclear, the traditional legend describe that more than 2,500 years ago two merchants, the brothers Taphussa and Bhalika, heard about famine in neighboring Bengal and headed west with 500 oxcarts laden with rice. One their way they met a nat spirit, Shwedagon gold umbrella

who asked them if they wanted gold or the treasures of heaven. After they had opted for the latter, the nat took them to the Lord Buddha, who was sitting meditating under a sacred tree. The brothers offered honey cake to the Enlightened One, and as reward they were given eight of his hairs, which they were to take home to the sacred site of Singuttara Hill.

On their return journey they had to give two of these hairs to King Ajjhata and two more to the Naga King Hayasena. But when Taphussa and Bhalika, together with King Okkalapa, took the remaining hairs to Siguttara Hill, miraculously they found all eight hairs in the casket. Gautama Buddha's hairs were placed in a chamber that was knee-deep in jewels, alongside relics of the three preceding Buddhas: Kakusandha's staff, Konagamana's water filter, and a piece of Kassapa's robe. One after another, stupas of gold, silver, copper, bronze, iron, marble, and finally brick were erected over the shrine to a height of approximately 10 meters.

Over the centuries, the ancient pagoda has suffered significant damage from earthquakes, and has been continously reconstructed and extended by successive rulers. The tradition of gilding the stupa was begun in the 15th century by Queen Shin Saw Pu, who provided her body weight in gold, and was continued by subsequent rulers, and even today pilgrims decorate it with gold leaf. An estimated 60 tonnes of gold is thought to adorn the pagoda, which now rises 98 meters above its base and covers a vast area. In addition, at the top of the stupa is a hti (umbrella) which is believed to contain more than 7,000 diamonds, rubies and sapphires and can be seen sparkling in the sun for miles around.